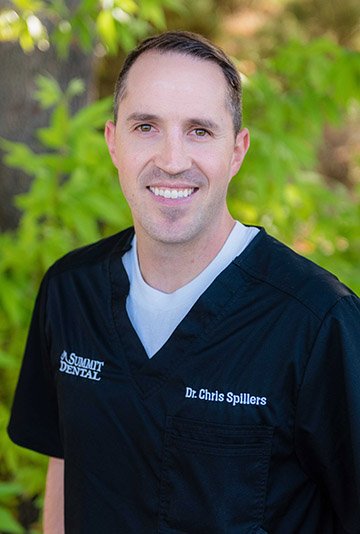 Dr. Spillers was born in Casper, Wyoming, where he spent his early childhood with his identical twin brother and younger sister. His family relocated to Reno, Nevada when he was 6 years old. After graduating high school he attended the University of Nevada, Reno and completed a Bachelor of Science in Biology, with a minor in Analytical-Organic Chemistry. Dr. Spillers decided to continue his education in Nevada at the UNLV School of Dental Medicine and spent four years falling in love with Las Vegas. During this time he also met and married his beautiful wife, Marilyn, who is a true Las Vegas native, and welcomed his first son Daniel into the world. While in dental school Dr. Spillers enjoyed serving the community through the Huntridge Teen Clinic and the Sgt. Ferrin Memorial Clinic, which provides free dental care for military veterans.

Upon graduation he accepted a commission into the United States Navy as a Lieutenant in the Dental Corps. He served 3 years at Camp Lejeune, which is a Marine Corps base in North Carolina. He completed a competitive one-year Advanced Education in General Dentistry and served countless Marine Corps warriors while developing a deep respect for our nation’s military members, past, present and future.

After his time in the Navy, Dr. Spillers spent 6 months practicing dentistry in Tucson, AZ with his twin brother Dr. Jeff Spillers, who is a dentist as well! He then fulfilled a longtime promise to his wife by moving back to Las Vegas to be closer to family. Since then his family has grown to include his only daughter, Hazel, and another son named Mitchell!

Dr. Spillers has found a true passion in dentistry and loves passing on that enthusiasm to his patients. He is constantly expanding his clinical knowledge and learning the newest technologies.